Our mission is to provide our customers with outstanding parts, fair pricing, and quality service backed up with the best warranty in the industry. SOUL Performance was formed by a team of enthusiasts with automotive industry experience looking to do the right thing by our customers. We aim to deliver exemplary service worldwide by developing incredible sounding, proven performing components that are always ready to ship to you quickly.

THE GHOST ICON SIGNIFIES SOUL'S COMMITMENT TO PERFORMANCE AND RACING

Several SOUL team members were involved in Porsche racing – specifically 944 Cup – and had a number of mascots along the way. The ghost is an evolution of their original logos – which also aligns with the name of our company. While all SOUL components are designed to be durable and are backed by our Lifetime Warranty and industry-leading customer service, our race-focused offerings are engineered to withstand the intense conditions that come with track use and abuse. Nothing is worse than preparing for a track event only to lose time or the entire day to a broken component – we know. Thicker brackets, extra mounting points, and back purged welds ensure longevity. If you ever need support, have any questions, run into any issues, or need advice, we are here to help in any way we can – no customer is ever left behind.

FACILITY SOUL Performance Products is located in a 20,000 square foot facility north of Philadelphia in Willow Grove, Pennsylvania. Our R&D area is equipped with two BendPak lifts and all the tools necessary to allow us to design, engineer, test, prototype, and fixture components. Our shipping area is set up to ensure that all components get a thorough inspection, orders ship complete with all hardware, and that products are well packed.

MANUFACTURING SOUL Performance Products is partnered with ISO 9001 Certified aerospace manufacturers, enabling us to work with technology and industrial scale, extreme precision equipment down to +/- 0.002 inches that would otherwise be beyond the limits of an exhaust manufacturer. Our capabilities include waterjet and laser cutting, tube bending, CNC machining, robotic welding and much more. We strategically deal with vendors worldwide to find appropriate components, such as high-quality HJS HD catalytic converters. Our mission is to provide the best possible results for our customers at great pricing. If you’re interested in participating in new product development or have any customization desires, we’re always happy to accommodate however possible. VP of Sales and Marketing
John@soulpp.com

With over 10 years of production management experienced in the aerospace industry, John followed his passion and took on a role which enabled him to help customers build the cars of their dreams. Now he looks forward to delivering great product and great service at a company built by enthusiasts for enthusiasts.

John was a very competitive formula circuit racer in his younger years (until the economy took a toll on the sport) and raced an extensive amount of vehicles for fun including his own 944 Cup car, a 1,000 horsepower Super Unlimited class Datsun 240, a spec BMW E30, and many more. PCA Member #2020030225 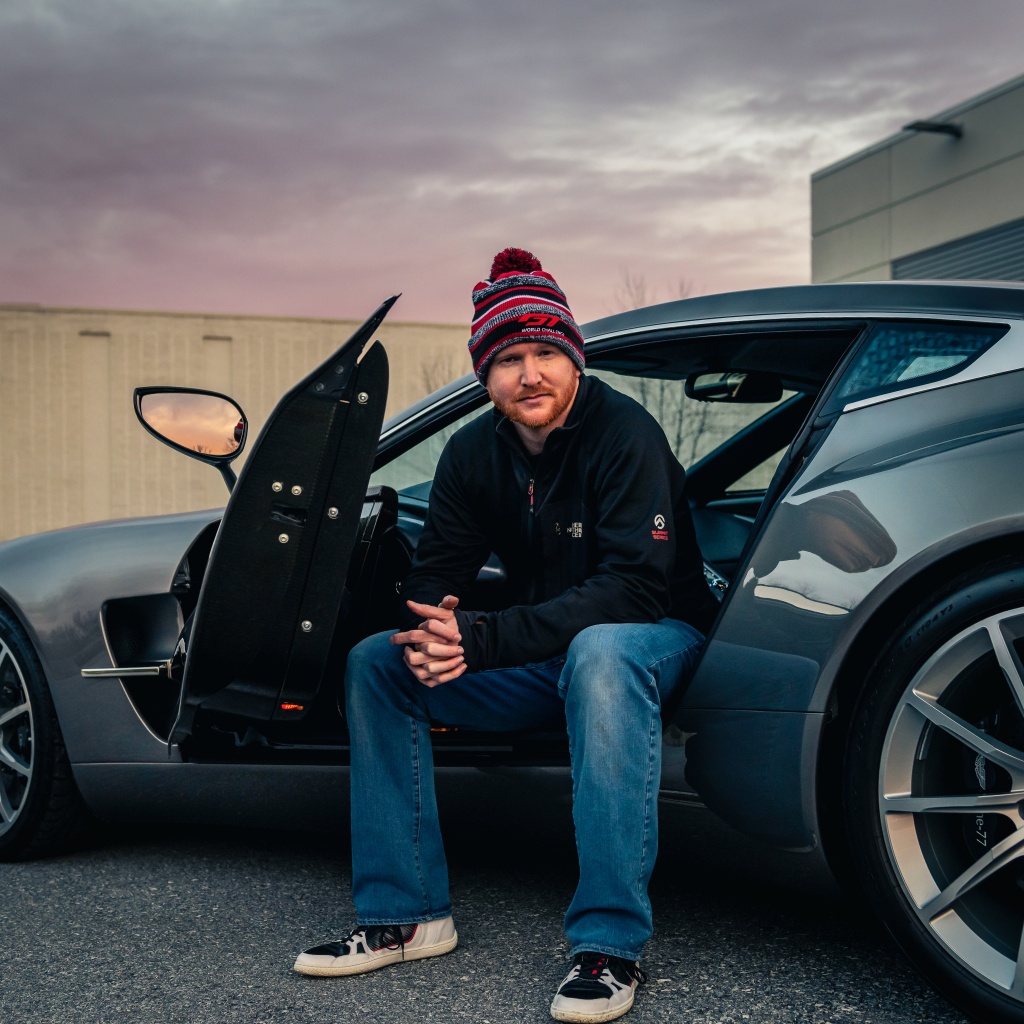 Jon combines his journalism degree with automotive passion to endlessly pursue the most significant cars in the world. His experience with major manufacturers like McLaren and Porsche provided a gateway to top-level motorsport and Concours events around the country–and while many of SOUL’s team members can be spotted on the track, Jon is frequently found just off track with a camera.

Jon’s automotive addictions have been specifically focused on hot hatches like the Focus ST and Golf GTI, but his sim racing experience gave him his own taste of being behind the wheel on the world’s greatest race tracks. John comes from an extended background of automotive experience – from 6 years of shifter kart racing, 10 year of autocross, endurance racing, to track days with his 987.2 Cayman R. Tracking your car on the East Coast? There’s a good chance you’ll run into him racing, driving and/or instructing through the Porsche Club of America and various other organizations. John has also worked at a premier racing shop where he developed hands-on knowledge of suspension, vehicle setup, and the finer details of maximizing performance in all aspects. He is dedicated to Porsche community as a nationally trained driving instructor for PCA and board member with our local Riesentoter region. He is always ready to enthusiastically discuss every aspect of your car including exhaust, suspension, brakes and everything in between. In addition to the Cayman R, John owns a 600hp LS7 swapped ‘98 Camaro Z28 fully built track days / auto-x, an E36 BMW built for endurance racing, a Suzuki SV650 motorcycle for weekend excursions, and enjoys daily driving his NA Miata. PCA National Instructor #201810735 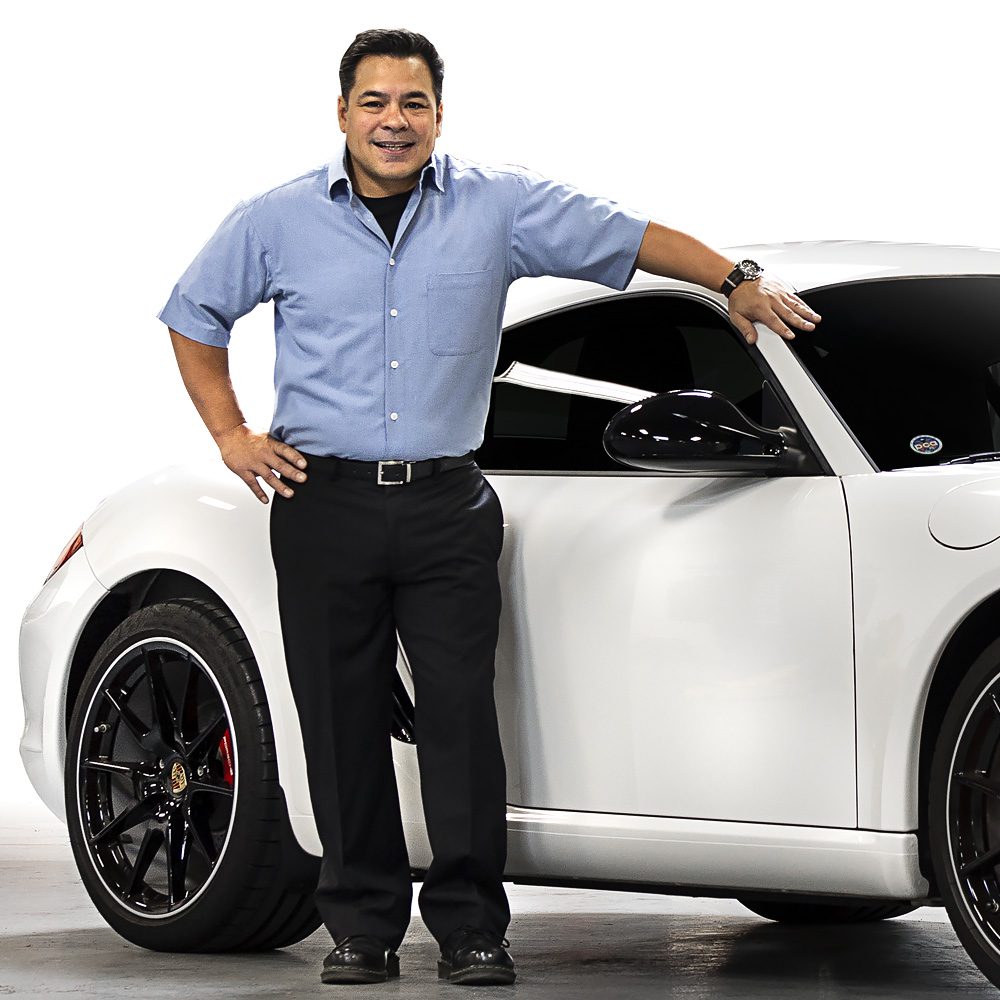 Paul fell in love with Porsches at an early age and had the pleasure of indulging in the heat of the air-cooled days. “The air-cooled sound is just intoxicating!” Several P-cars later, and the stable currently consists of a 1978 911 SC and 2011 Cayman S. PCA Member #2014111062

Paul is a “seasoned” professional – and we mean that in a cheeky sense – he’s owned and managed several restaurants (including one for Iron Chef Bobby Flay) for over 15 years. His skills were forged under years of navigating stressful environments – including instant and overwhelming success when one of his restaurants was featured on a Food Network special.

Paul followed his heart and decided to focus on automotive performance and making sure every customer is happy with their upgrades – and that every shop can have that same assurance for their customers when they outfit them with SOUL. Experienced in this business – and with an aptitude for business – you can be sure that Paul will go out of his way to make your experience with us top notch. 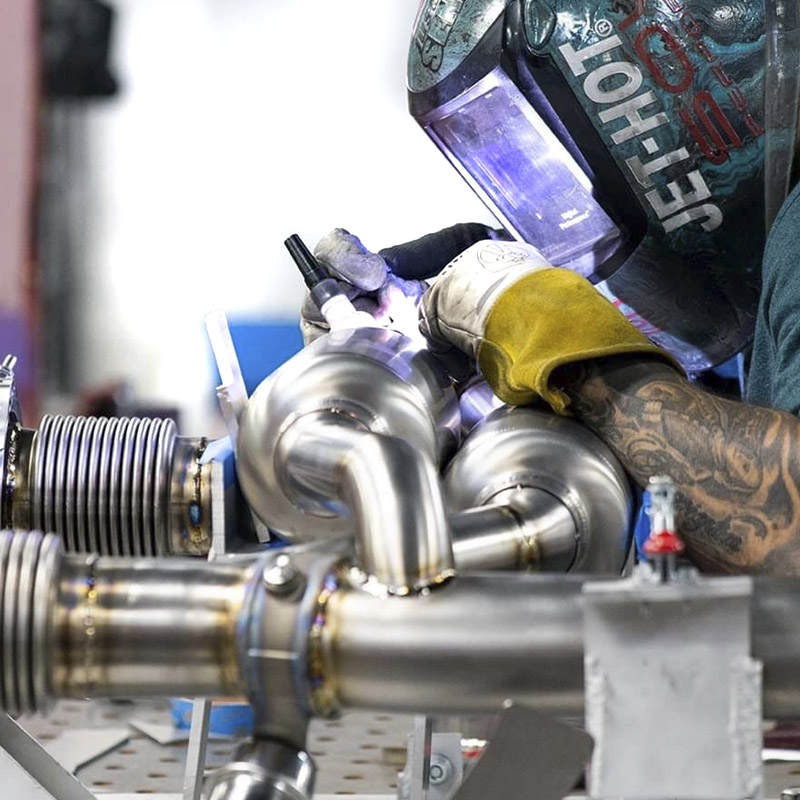 VP of Development and Manufacturing
Max@soulpp.com

Max spends his days manipulating metal into masterpieces. His past experience as fabricator and foreman gives him the ability to craft product from start to finish. “We’re going to make sure it works.” Nothing leaves his work bench until he’s satisfied it will meet expectations, something we can all appreciate!

In his free time Max enjoys building metal figurines from junk bits, playing with his dog, and taking photos at automotive events and during his many travels. 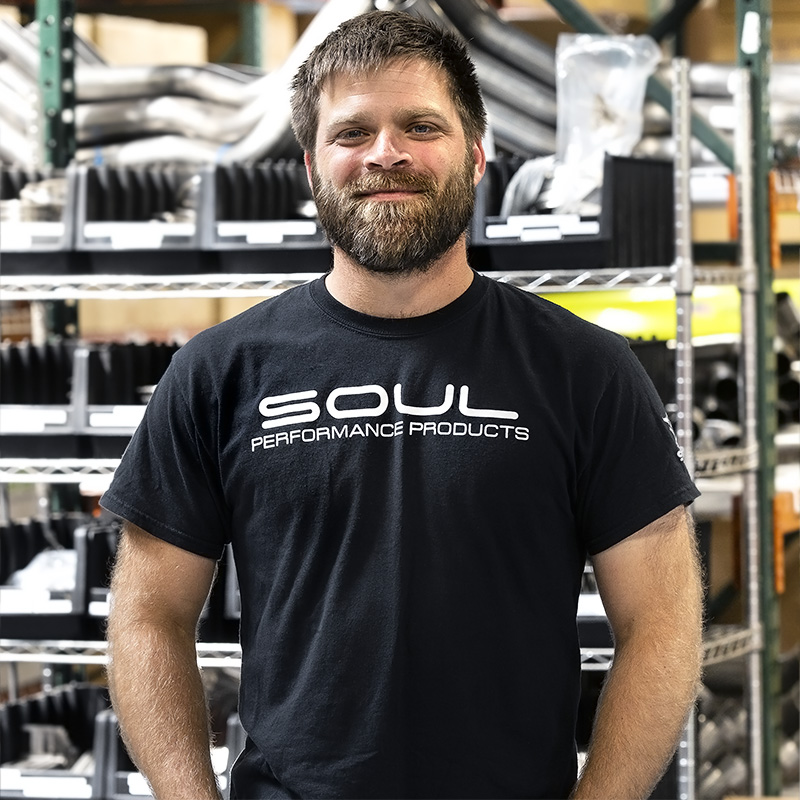 Kyle is responsible for keeping track of every bolt, flange, and component in this building and making sure the supply chain runs smoothly – not an easy task. With a background as a chemist, he realizes that one little mistake can cause issues down the line and thus is extra diligent about our warehouse and the thousands of tracked pieces in it.

Kyle used to crew for John B during his 944 racing days, and his 87′ 924S has several takeoff components from his race cars making for a fun street car. 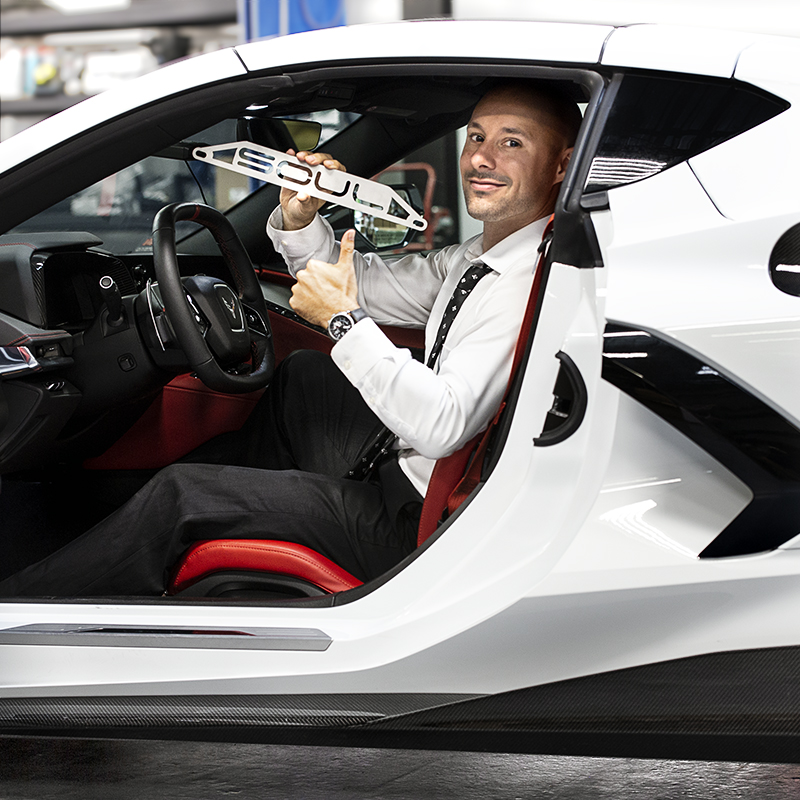 Mike has spent his entire career in the automotive industry – focusing on producing creative, high quality content and collaborating with customers in many roles from sales to marketing. His goal at SOUL is to deliver you as much information and media as possible while highlighting customers and their vehicles.

Mike spent years building up a turbo NA Miata from the ground up and now tinkers on his 1.8T 914 Project Car and mountain bikes. PCA Member #2021061466 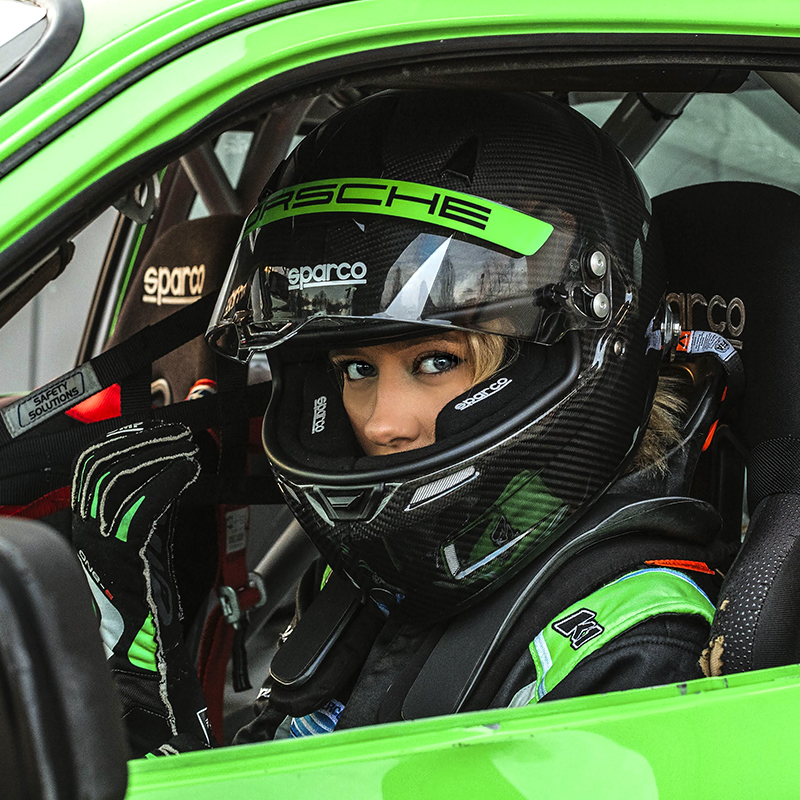 Alex is ready to help you get the full SOUL experience in any way she can! She grew up in a car family, through and through, and has years of track experience. Her automotive arsenal includes a daily driven 987.1 Porsche Design Edition 1 Cayman S, Spec 944 SP2 race car, and 81′ Camaro Z28. When she’s not at the track or at SOUL she enjoys skiing, singing and playing bass, and training to become a pilot.  PCA Member #2020070350