Increase downforce and stability while increasing rear visibility through easy to install Autoquest Motorsports Wing Risers for your GT4.

When the GT4 is being pushed to the limit, AutoQuest Motorsports found the car doesn’t feel very stable or promote much confidence in the higher speed corners, especially with street tires. The underlying issue stems from the rather unsophisticated strut style rear suspension. Sufficient downforce would help offset this weak point on the GT4, although the factory wing is mounted quite low (mostly for cosmetic appeal, and for good reason as it certainly looks great!). However, on most tracks in a street car there are very few corners you take at over 100mph. Most of them around 70-90mph, some in the low 100s, and the outliers in the mid-high 100s. The GT4 has a rather weak amount of downforce of about 30-40lbs, which isn’t sufficient for most track conditions in which this car is being used. Therefore, AQM set to task improving the downforce of the car.

Generally speaking, Porsche makes a very good wing in itself. They are quite aerodynamically efficient from both a downforce and drag perspective, and the GT4’s factory wing is no exception. Therefore, instead of pursuing a larger wing, AQM tested the benefits of maximizing the use of the existing wing by changing its height. In its low factory mounting point the wing uses very little of its overall potential due to the height difference of the roofline and the wing, as much of the air stream is blocked by the body of the car. The actual surface area of the wing being effectively used is very low, mostly on the outer portions. As you raise the wing higher with our wing risers, it allows access to more clean air and increases the amount of surface area being effectively used towards the wing’s center. The higher you raise the wing the more downforce you add, accessing more unrestricted airflow while keeping conscious of the structural integrity of the wing. On that basis, they designed 2″, 4″ and 6″ wing risers for the factory wing for testing purposes. AQM went to Sebring and Road America, easily switching them out in minutes with a variety of different GT4s/Clubsports and drivers throughout the season. Downforce was tested the old fashion way…how the car felt through the corners, particularly at Sebring through the Bishops at 125-130mph.

The 6in risers were the winner, there is a noticeable improvement in the GT4 hunkering down throughout the track from increased downforce. The car is much more planted, secure, and confidence inspiring through the higher speed corners. Some other interesting feedback…for those of you who don’t know, the GT4 comes with blocks installed in the front diffuser from factory. AutoQuest found no noticeable benefit from these blocks being removed in the various testing sessions with the factory wing height or the smaller risers, that is until the 6″ risers were installed. At that point, the diffuser blocks removed offered a noticeable compliment in front downforce to the increased rear downforce from 6″ risers. All else equal, a standard GT4 with AQM wing risers, front diffuser blocks removed and running a Gurney Flap had noticeably more grip than that of a GT4 Clubsport running without them. There is no doubt wing risers provide a noticeable benefit to the downforce/handling of the car, offering a great bang for the buck improvement.

The cherry on top…when you look in the rear view mirror, the wing has been relocated high enough for near perfect rear visibility and improved situational awareness on and off the track.

Have any questions? Speak to our Porsche Performance Specialist with years of first hand experience at AQM about your specific needs! 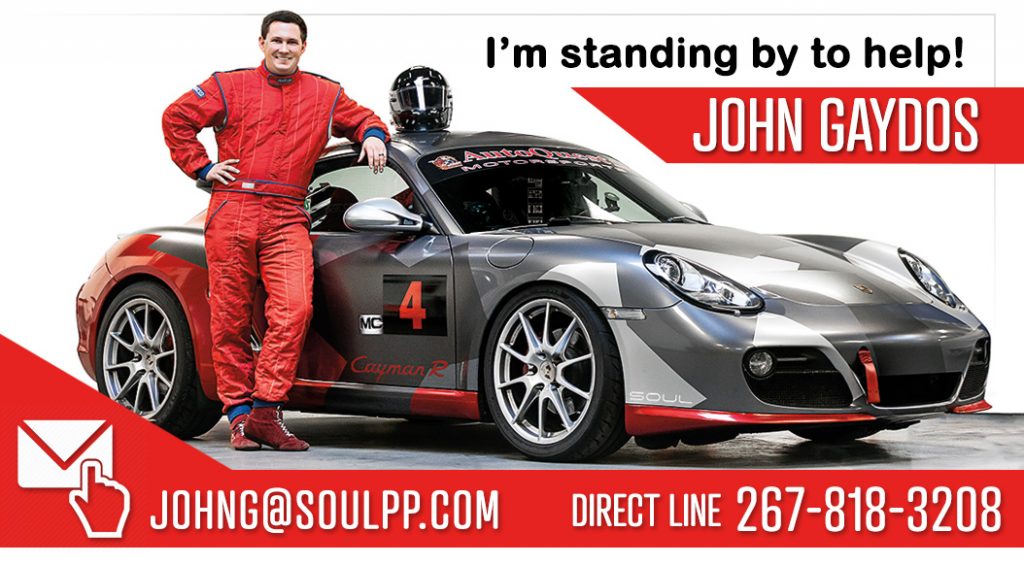 ABOUT AQM:  With decades of Porsche racing experience around the world, Gavin is preparing performance components and race prepping cars to the highest caliber for the discerning enthusiast and track fanatics. Past customers come back to him again and again to “Trust the Kiwi” because of his encyclopedic knowledge, track credentials, and enthusiasm. SOUL has years of first hand experience using AQM products and stand behind them and their services.