The Audi C8 RS6 / RS7 intake system is the culmination of extensive development, testing and prototyping. This intake system has been developed to offer the highest possible flow rate whilst maintaining the lowest intake temperatures possible.

Each intake system consists of:

Eventuri completely redesigned the entire airbox system including the base which the filter sits inside. We have combined the slam panel with the lower airbox and increased the volume of this area to help increase the total flow rate. Furthermore, the base has been designed to allow the filter to sit at a more favorable angle to the turbo inlets. Where the stock airbox has a 90 degrees turn from the filter to the inlets, this airbox has a less abrupt angle and this allows for a smoother flow path.

During development Eventuri designed and tested 4 different designs for the lid and test results showed that V2 was the highest performing. This design was optimized with CFD simulations and provides a smooth flow path from the filter to the inlets. This design has an increased volume in comparison to the stock lid and is more organically shaped with smoother curves as opposed to the stock lid which is very cuboid. Furthermore the openings to the turbo inlets have been significantly increased in size.

The inlets have been increased in size at the airbox side by as much as 85% more than the stock inlets and smoothly taper down to the stock turbos. This increased size significantly reduces the drag in the turbos and therefore allows them to work more efficiently. Eventuri also incorporated CNC machined bushes and rings in the inlets for structural strength. For cars with hybrid turbos, we also have separate inlets available on request to match the different inlet diameters.

This airbox required a bespoke panel filter and for this we collaborated with BMC who have developed their iconic filter specifically for our system. It is a washable 4-layer cotton mesh filter which provides superior filtration while maintaining a low pressure drop.

The complete intake system comes together to provide a superior airbox which allows the turbos to reach target boost levels much sooner and therefore the engine is able to produce more power earlier in the RPM range. When combined with a tune where the boost levels are increased, this airbox provides the required de-restricted flow path for the turbos to achieve elevated boost pressures.

Dyno testing was carried out by Awesome GTI in the UK on their own C8 RS6 equipped with an aftermarket OPF back exhaust. They tested the car with the stock map and also their own stage 1 remap. They ran the car 4 times in 4th gear with the stock airbox and then swapped over to the Eventuri while the car remained on the dyno. The car was then run again in 4th gear 4 times. Testing was all done on the same day and no other changes were made. The graph below shows the highest power from the stock airbox vs highest power run from the Eventuri intake. Both were the first dyno pulls with subsequent pulls reducing in power due to heat soak. As can be seen below the intake provides a significant gain in performance throughout the RPM range with the stock map and more so with the stage 1 remap. The highlighted point shows the highest gain in the RPM range of 23hp at the wheels.

Due to the intense heat generated by the turbo, Eventuri designed a heat shield to protect the carbon tube. The shield is powder coated black but has a gold reflective layer on the base which deflects radiation heat from the turbo and catalyst. It has a stainless steel brace to provide rigidity and curves around the back of the tube to deflect convective heat away. Please note – this shield may not fit some full frame turbo systems with a different exhaust manifold. 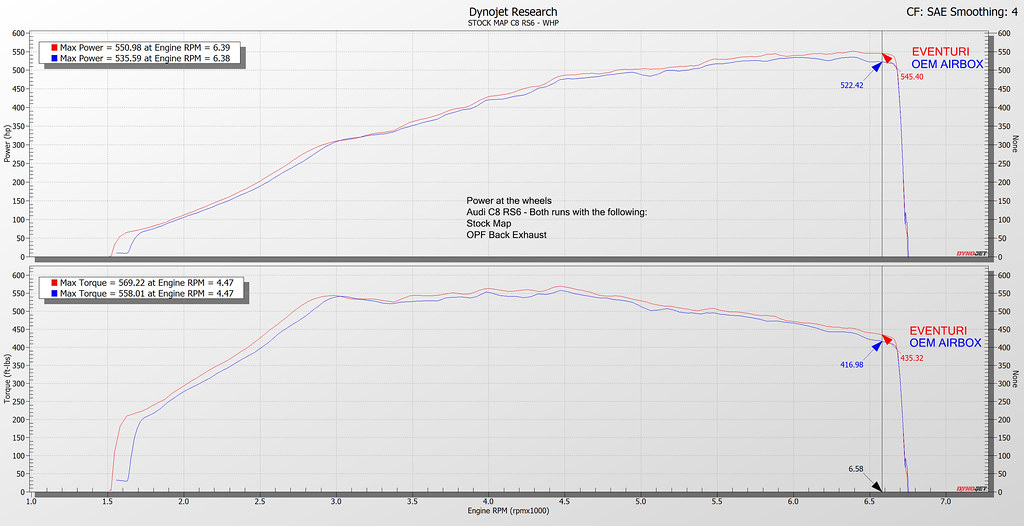 Here are the results from the Awesome GTI Stage 1 remap. Both runs had the same map with only the intake being swapped between runs. Again – they ran the car 4 times in 4th gear with the stock airbox and then swapped over to the Eventuri while the car remained on the dyno. The highlighted point shows the highest gain in the RPM range of 60hp at the wheels. The resulting gains are noticeable on the road with better throttle response and improved acceleration times. 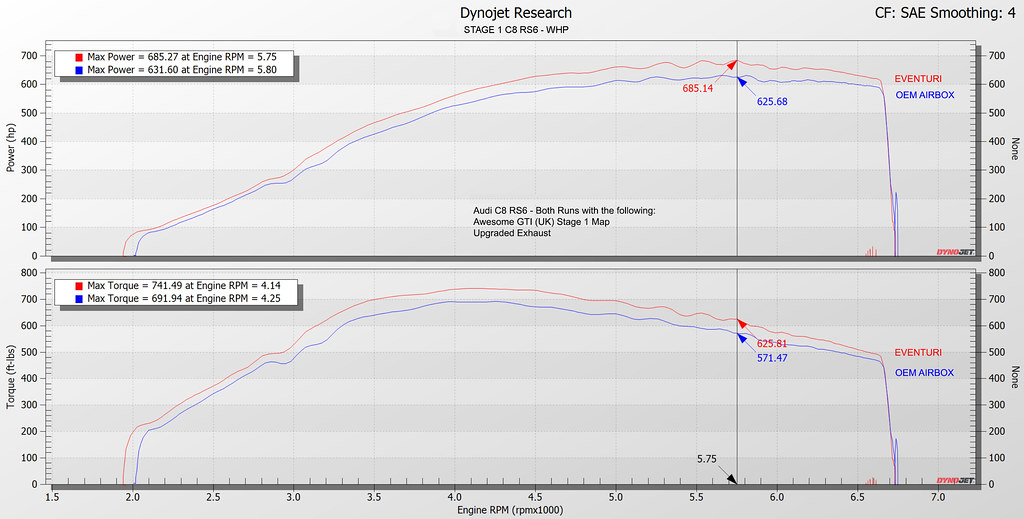 Dyno testing on a stage 2 RS6 was carried out by Eurocharged Canada on a car with aftermarket downpipes, intercoolers and their own stage 2 remap. Figures here are shown at the wheel. They ran the car multiple times with both the stock airbox and the Eventuri with the resulting figures shown below after taking the best stock vs the best Eventuri results. Again we can see a dramatic increase in power and since this is at stage 2 levels, the stock airbox is an even bigger restriction. The highlighted point shows the highest gain in the RPM range of 79hp at the wheels. 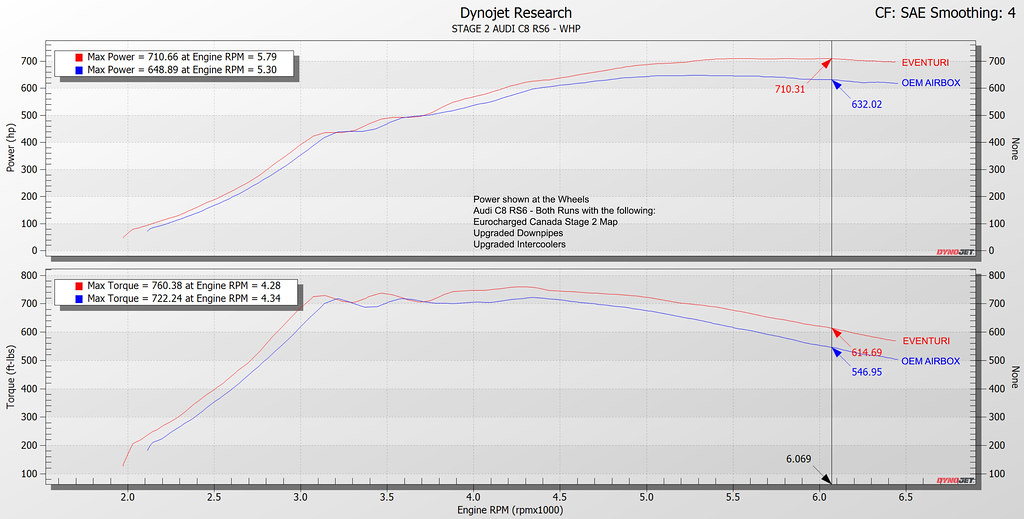 ABOUT EVENTURI:  Eventuri was founded by a team of engineers and enthusiasts with a background in Aeronautics and tuning – all sharing a passion for cars and performance.  Eventuri Intakes are extensively developed using cutting edge design, testing and prototyping methods. With a focus on performance, each design undergoes CFD analysis and is then validated at the prototype stage through volumetric airflow, intake temperature and extensive dynamometer testing. We strive to publish all the development information to illustrate the depths we go to in bringing an intake from concept to reality. After many years of disappointment with the usual aftermarket intakes, Eventuri are proud to be raising the bar and creating intake systems which are setting a new standard and genuinely improve performance.