The complete intercooler solution by do88 for your Carrera including larger intercoolers and charge pipes.

This is as good as you can make an intercooler kit for this platform! No rock has been left unturned in do88’s quest for maximum performance in any given section of the system. The starting point is the cores from renowned Garrett Motorsport, these are incredibly well-made with thin and stacked fins, exactly according to do88’s specification in the weighing of cooling and airflow. The end tanks are made from thin, cast aluminum to keep the weight down and still utilize airflow. To accommodate the thicker core, do88 replaces the air guides with carbon ducts made from the best quality! To remove bottlenecks throughout the system, the intercooler connections are made bigger and come along with do88 silicone hoses designed with soft, sweeping bends.

Background:
Earlier versions of the Porsche 911 have their intercoolers inside each rear fender, with a y-pipe uniting them both before the charge air reaches the inlet manifold. The 992 has a different set-up entirely. The intercooler and y-pipe are now combined to a unit that sits beneath the rear wing. The ambient air is pushed via channels from the rear window, into a scoop on the decklid, and onwards through the intercooler core for optimal heat transfer. The active rear wing is crucial for the efficiency of the core as it directs more air in its upright position. Looking at the construction from the side, this configuration really makes more sense, but is also more demanding for us a performance cooling manufacturer. To be able to fit a core with greater volume and surface area, do88 had to develop new carbon ducts to allow the increase in thickness.

Cores from Garrett:
The cores are Bar & Plate, made by renowned Garrett Motorsport. Thin and stacked cooling fins give a dense construction, providing very efficient heat transfer. The core measures 105 mm (4”) and are exactly as thick as you possibly can make them for this application. The air is distributed to the entire core via free form-designed, cast end tanks. Designing these was a significant undertaking that concluded 3D-scanning, CFD-analysis and 3D-printing many times over until do88 had a finished prototype. Cast end tanks allow shapes that CNC-machining cannot replicate, and to do88 function always conquers form. Maximum airflow supersedes the bling factor! The tanks are made with machined 70 mm (2,75”) connections to enable high outputs. To pair with these bigger connections, silicone hoses are included. Both cores are united by a central outlet tank towards the inlet manifold, utilizing machined connections and meth bungs.

Ambient air guides made from carbon:
The air guides are made from vacuum infused, prepreg carbon and all pieces come with fastening grooves for the air channels just like the OE bits. The two upper air guides are always the same regardless of what car you have, but for the two lower pieces there is an option: Standard or Sport Design. Sport Design has better evacuation of the cooling air via an outlet in the middle of the bumper. They come with proper rubber seals where this is needed to prevent the cooling air to escape pass the core.

Aluminum pipework
Intercooler pipework is included– a distinctive improvement that replaces the flimsy OE hoses. Made from mandrel bent 63 mm (2,5”) aluminum pipes, finished in a tasteful, satin black powder coating, they provide better airflow and sustainability over time. Included with the pipework are four silicone hoses, of which the turbo outlet hoses are made from a high-temp spec. material rated to 240°C (464°F) continuous temperature. The hose clamps in this position is of the “constant tension” type, meaning they will compensate for thermal expansions in the material.

Performance:
When it comes down to performance, the do88 intercoolers significantly reduce the intake temperature! In the graph below the difference towards the OE 992 units is presented. The data is collected with an AIM race logger under 5 consecutive runs in an immediate sequence on a closed airstrip. Full throttle accelerations between 50-250 km/h (30-155 mph) carried out in a Porsche 911 Carrera S (450 hp). Hard braking, no cooldown in between, just full pull five times. The rear wing was in its upper position all the time.

The test was conducted in the following manner:
Firstly, 5 runs were made with the car equipped with the 992 OE intercoolers. Stop, fast change of parts to the do88 intercoolers. Shakedown for a few minutes and then five runs made in the exact same way as with the OE parts. The decrease in inlet air temperature is significant, peak delta is 9°C (16,2 F). See the graph below!

Cooling is important, and so is airflow. After many hours in the development, refining the end tanks and choosing a core, the result is an intercooler that is much more efficient in terms of heat transfer as well as airflow. Using tan in-house flowbench, Superflow SF-1020 Probench, the airflow is verified for both the do88 intercoolers and the OE 992 units. What you see is what you get – true performance! 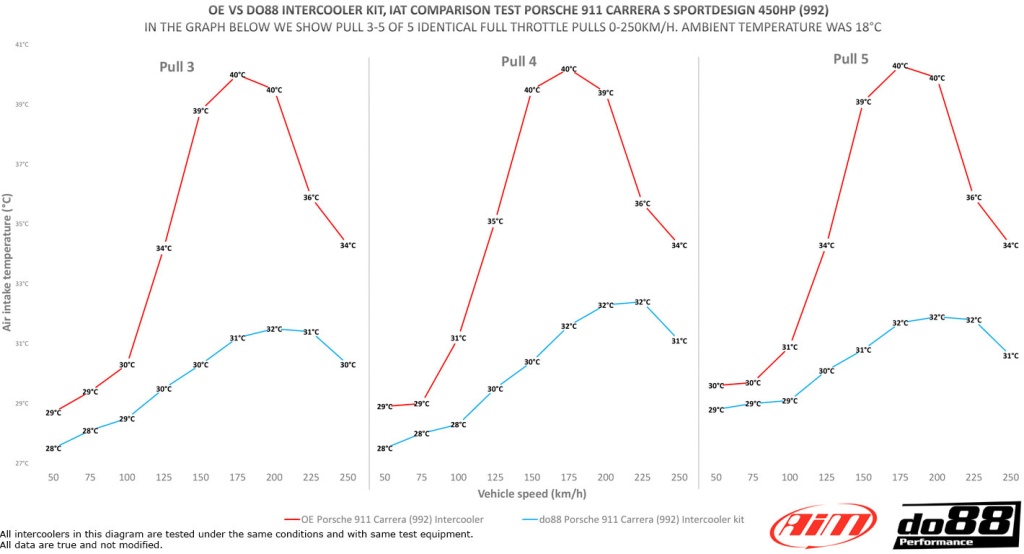 NOTE: If your car has the unnecessary Noise Generator (Soundsystem) it will not be in use.

ABOUT DO88:  Based in Nykvarn, Sweden, do88 started off in 2007 selling universal silicone hoses. Today they have 170 various silicone hose kits (and counting), model adapted intercoolers, oil coolers, radiators and so on. Everything, yes everything, is developed by do88 in house.

SHIPPING:  Usually ships same or next business day when in stock with lead times up to a month if out of stock. Contact us for expedited orders to ensure proper delivery time.