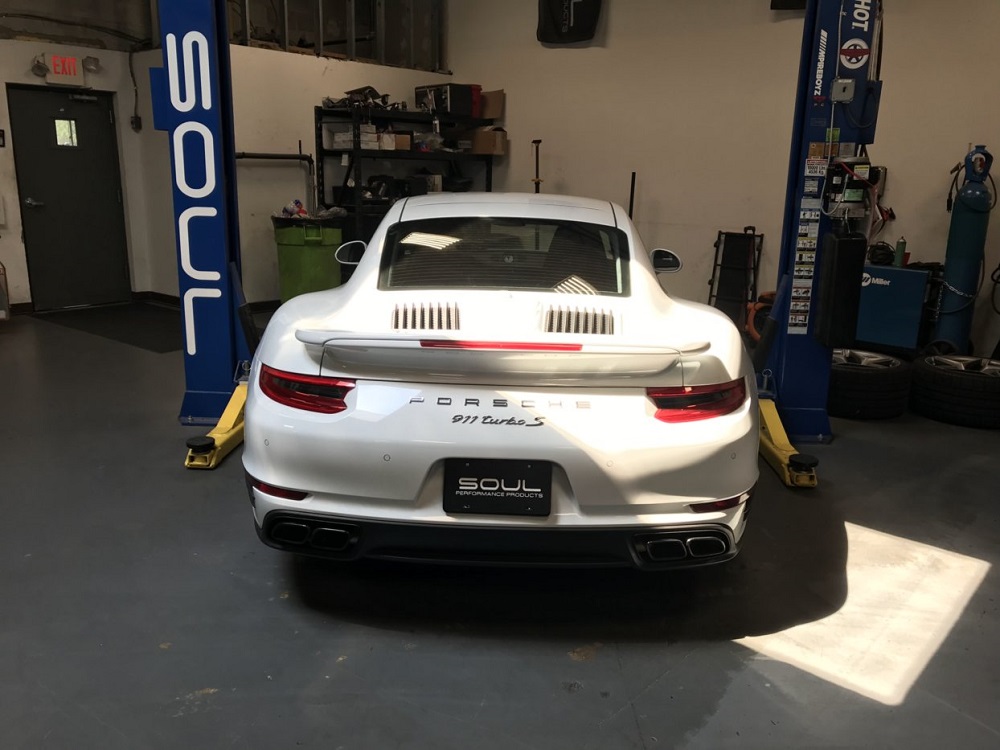 After nearly a year with my 2018 911 Turbo S it continues to impress and recent upgrades by Soul Performance takes it to the next level.

One of the few things as fast as a 2018 911 Turbo S is time. I can’t believe that nearly a year has passed already since I bought the car home. When I introduced the car to Rennlist for the first time I mentioned that I had no modifications planned until maybe next summer. Guess what? It’s now next summer, and I did decide to do a couple of mods to bring the car closer to my version of everyday supercar perfection. I turned to the experts at Soul Performance and could not be happier. This update will focus on the mods I did and the results of those mods.

While the big news since my last update is the modifications that is not all this article is about. I said this was going to be my everyday supercar and that meant I would take on many different adventures during my time with it. Since the last update the car has been to Porsche Parade, on several spirited backroad drives, a number of car shows, and even was part of a funeral procession. I said I would take this car everywhere, and I have. Except the track. My schedule this year has been insane and included a few curveballs that have prevented me from getting any real track time yet. However, I do still have my sights set on that and hopefully I have track impressions to share in my next update in this series. But for now, this is what the car and I have been up to. 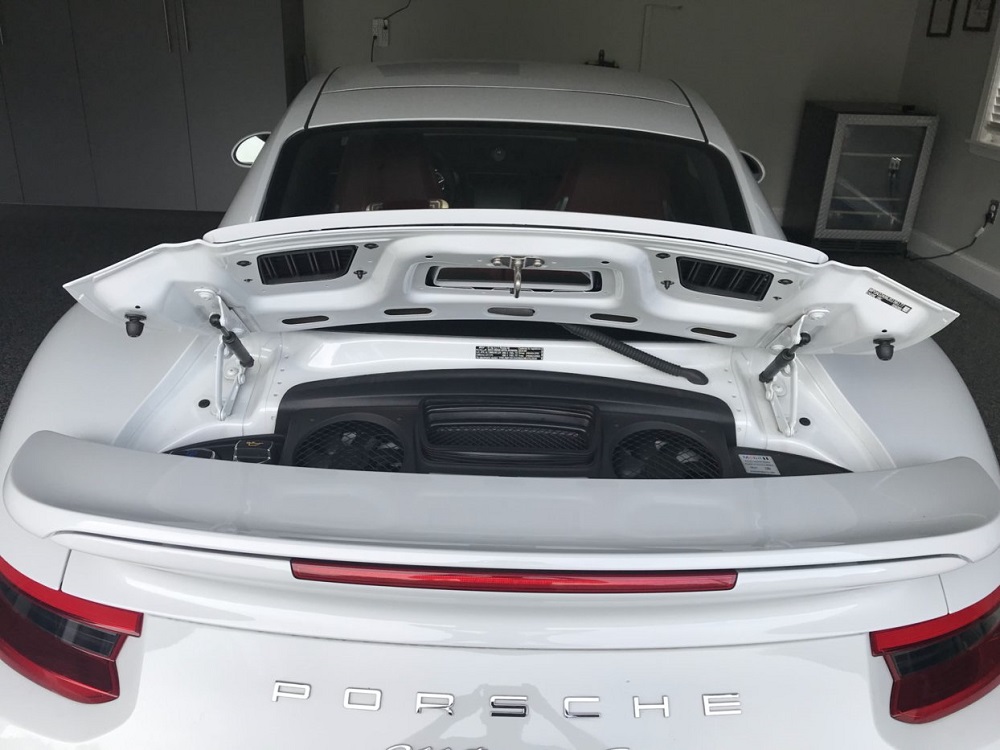 If you can’t depend on it, then it can’t be an everyday car. I can depend on this car as it has been dead reliable thus far. Since I have owned the car, I have put roughly 4,000 miles on it. It has just under 14,000 total miles on it in total. Granted that is not exactly high mileage but it is not uncommon for vehicles capable of hitting over 200 mph to have things go wrong. No so with the Porsche. The only ‘fix’ it required was to replace the engine lid struts as they failed. This is a common issue on the 991.

Public service announcement on those struts. Whatever you do, don’t pay for a dealer or shop to replace these struts for you. A dealer is going to charge you several hundred dollars and this has to be the easiest thing in the world to do yourself. If you can pump gas, you can replace these yourself. I got the OEM struts delivered to my house for $47. It took me less than two minutes to replace both of them. I am NOT a mechanic. You can do this for even less if you get non-OEM struts. But whatever you do, don’t waste your money paying for someone else to do something so easy. 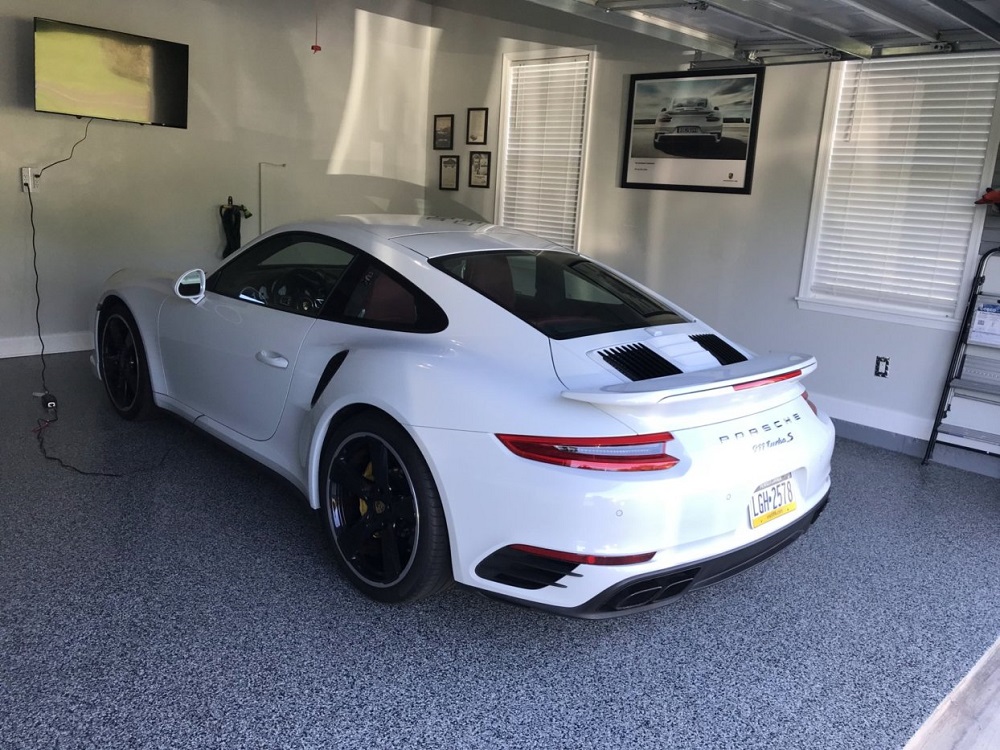 Other than the struts the only other item I replaced was the battery. My car is a 2018 but it was built in 2017 and on the original battery. I keep the car hooked up to a tender and I noticed it was taking longer and longer to get a full charge. So, I played it safe and had a new AGM battery installed. I had my favorite indy shop do that along with a fresh oil change and a state inspection. All in I paid about $800 for everything. Again, I feel this is a very reasonable amount for a vehicle that can perform like this car can. And of course, a battery and oil change are not all that hard on these cars, and you can certainly do it on your own if you wish. 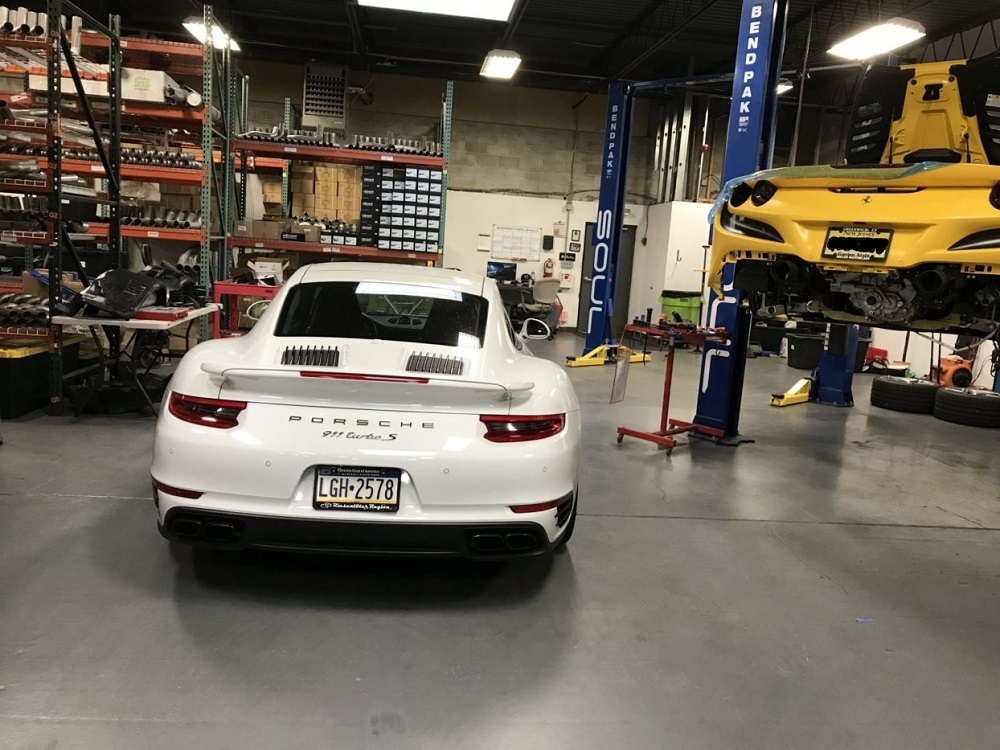 On the off chance that you don’t have my original article about my 2018 911 Turbo S committed to memory, allow me to offer a refresher. Before I bought this car, I was originally on the hunt for a GT3. The handling, speed, and visceral feel of the GT3 is tough to beat. But I felt that the Turbo S offered about 90 percent of the handling, and 110 percent of the speed for significantly less than what the GT3 would cost. Where the Turbo S lagged the GT3 the most was on the visceral side of the equation. That is where the GT3 holds a distinct advantage. I wanted to upgrade my Turbo S in a way that would help it to close that gap. Yet retain the luxury features and comfort that the Turbo S offers. 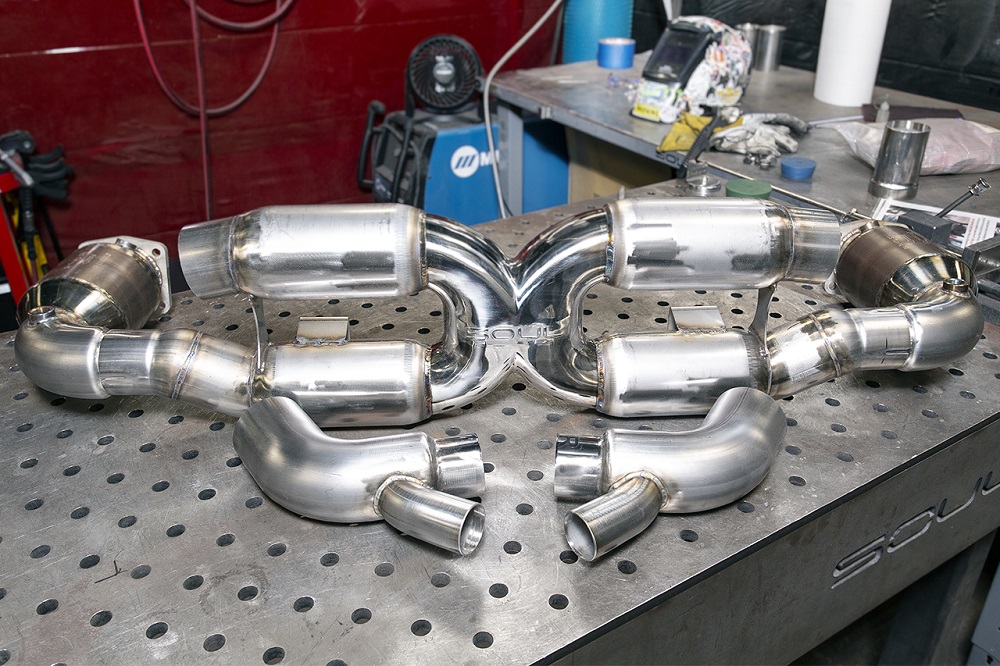 I decided that what I wanted for my car was a tune and exhaust. A 2018 Turbo S is already stupid fast. But these cars take so well to a tune that it is almost a no brainer. 100 horsepower for $2,000. How can you say no? That is less than the cost of getting your air vents covered in leather ($2,350) in a new Turbo S. I find 100 horsepower to be much more entertaining than superfluous leather. The next big piece is the sound. The stock Turbo S doesn’t sound bad, but it does not have the sound to back up the performance. Some folks like that silent assassin feel of the stock car but I don’t. I don’t need straight pipe loud, but I need the car to sound like it means business. 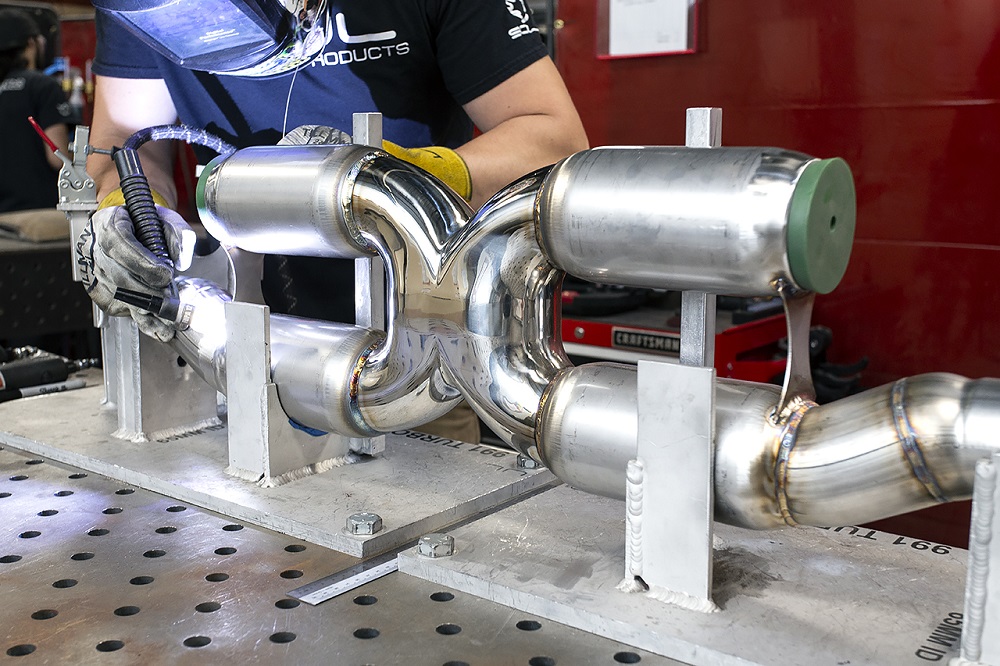 Lucky for me I live only about 25 minutes from Soul Performance. They are one of the premier Porsche performance companies in the country. Their tag line is “Sound Better, Go Faster” and that is exactly what I wanted out of my car. Aside from offering high quality products, Soul is made up of high-quality people. They work with you to ensure that the products you are getting deliver exactly what you are looking for. And if for some reason you are not happy, they will work with you until you are thrilled with the results. I worked primarily with John Gaydos from Soul to develop a system that will meet my needs. Within the first 5 miles of my post-upgrade drive I could confirm that what Gaydos suggested for me was spot on. 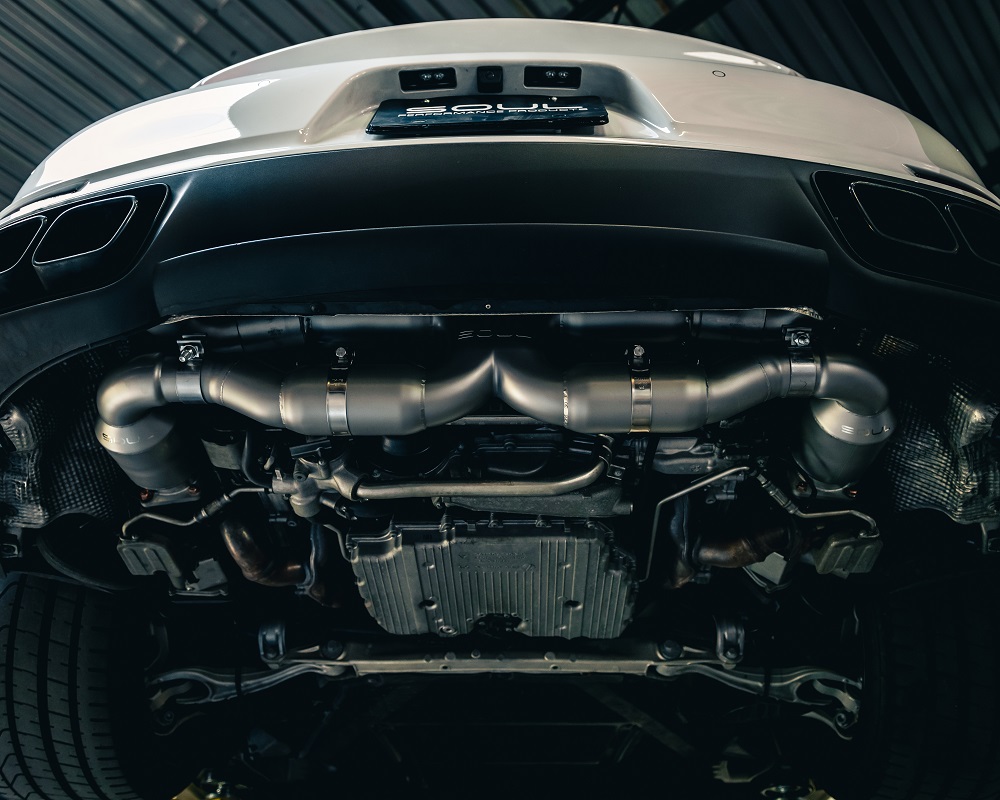 To get me the sound I was looking for I went with the Sport X-Pipe Exhaust. The pictures you see here of the system being built is the actual exhaust that was installed on my car. This system includes high flow 200 cell cats and an exhaust design that increases flow, power and of course sound. A nice side benefit is that this system is only about two thirds the weight of the stock system. Soul also offers a couple different exhaust tip options to finish off the look. I actually like the design of the stock Turbo S tips so I decided to keep them so there is really no visual clue that my car is not stock. However, there are plenty of audible clues that this is no longer a stock Turbo S. 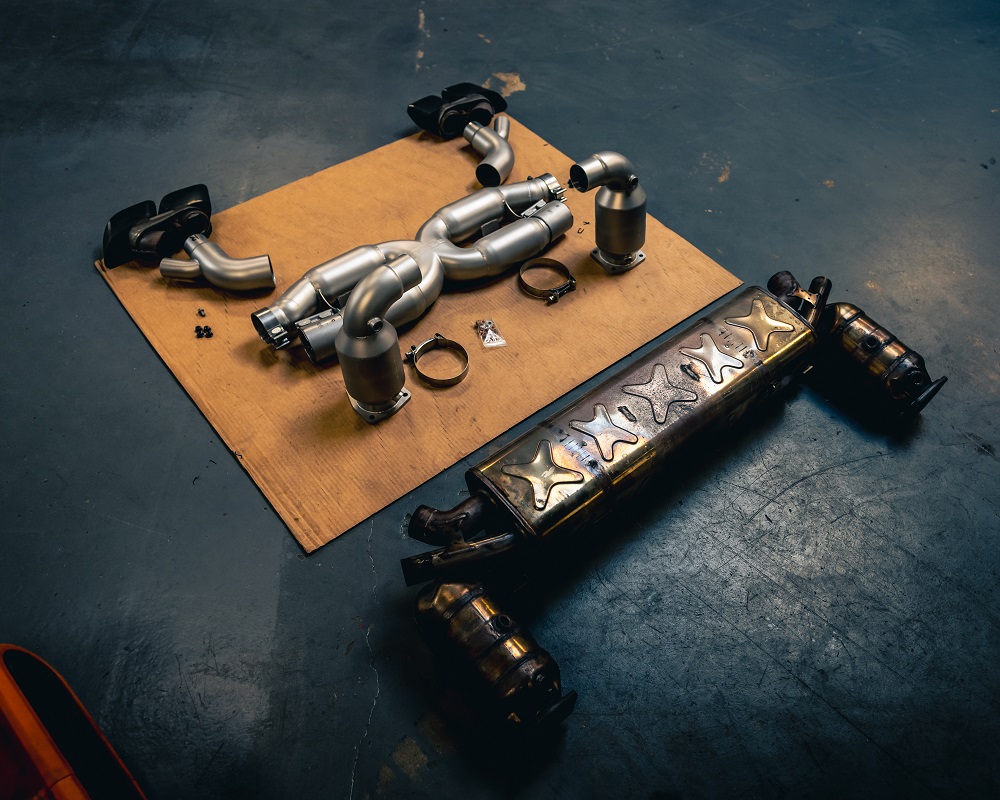 After I decided on the Sport X-Pipe Exhaust I scoured the internet looking for as many sound clips of this system as I could find. They all sounded good and made the wait until my exhaust was installed much more difficult. I can also tell you that all the videos pale in comparison to what this sounds like in real life. I expected it to sound better than stock for sure, but I also knew that the turbos would muffle the sound somewhat and it would never sound like my old 981 Cayman S with headers. My expectations were exceeded. It has a clear, sharp bark to it. It pops and bangs, and you get the added bonus of hearing all the turbo noises. I made a quick and dirty cold rev video to give a sense of the sound, but honestly in real life it is twice as good. 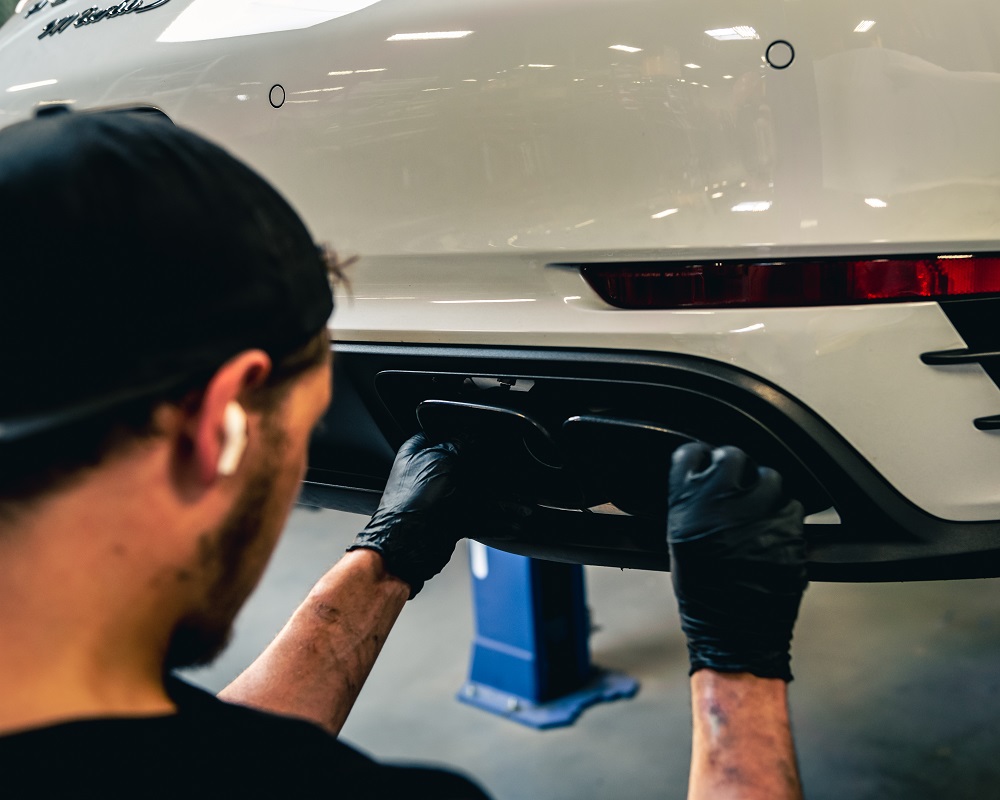 Eventually I will get more videos out there to hopefully better capture the sound of this exhaust. But another important factor to consider when upgrading any exhaust is drone. A sporty sound is great but sometimes you just want to have a conversation with a passenger. There is very little to no drone in this exhaust. Yes, it is a bit louder inside the cabin, but the overwhelming majority of the sound is a pleasant sporty sound. The exhaust is constructed in a way to eliminate the resonating sounds that some aftermarket exhausts can be plagued with. And if I ever do want to dial things back a bit, I could pop over to the ‘Normal’ drive mode and that results in a much more subdued sound. 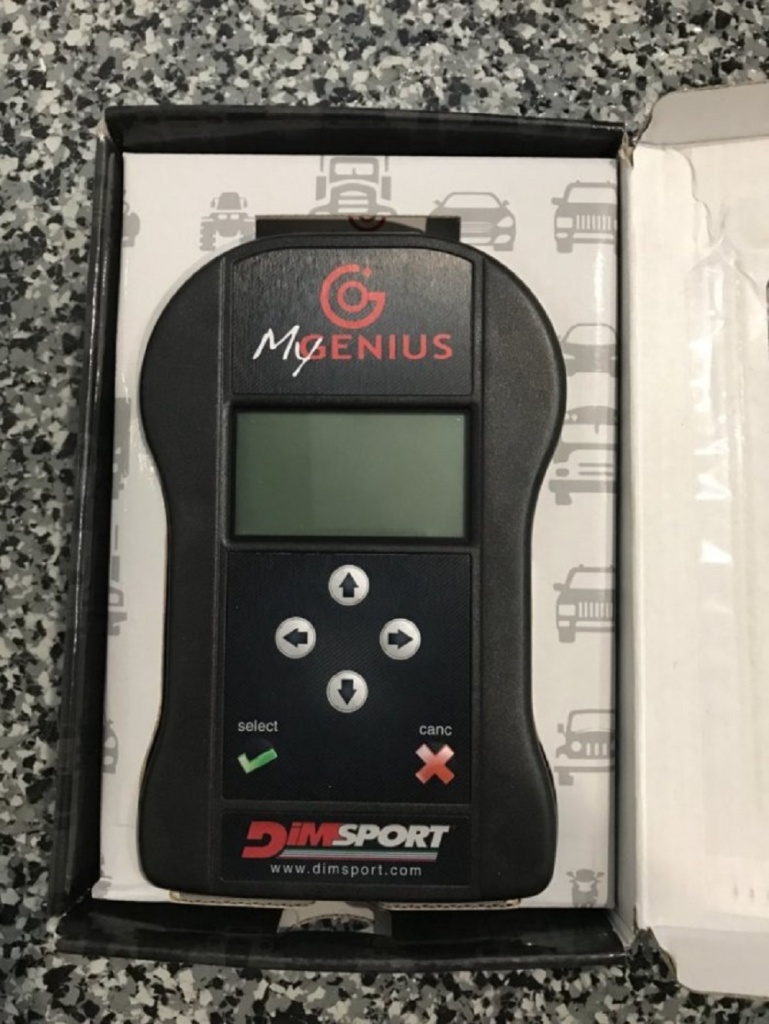 There are a number of tuners out there but after doing my own research and talking with Gaydos I decided to go with a Softronic tune for my car. Scott Slauson from Softronic has been working on and tuning Porsche cars for decades. And like Soul Performance, Softronic has an excellent reputation for support. The tune on my car results in a boost to 700 horsepower and 660 pound-feet of torque based on Softronic estimates. Based on my driving impressions I have no reason to doubt those numbers. This is real power that I can feel every time I get behind the wheel. The car is faster and more responsive than it was before. 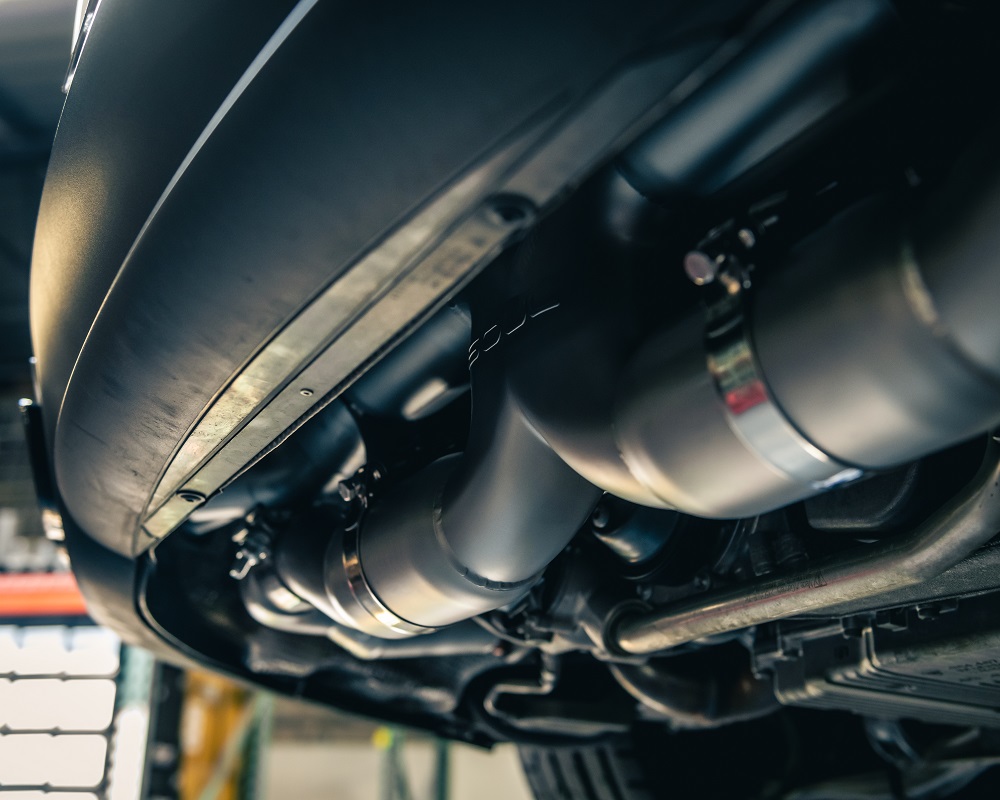 I know I don’t have the fastest car in the world. However, outside of high-end car shows, I could drive a thousand miles before I happen to cross paths with a faster car in the real world. And of those faster cars, how many are more reliable, comfortable, and practical than this 911 Turbo S? And now it sounds great to boot. It was an amazing everyday supercar before and now with the extra sound and power it is on another level. 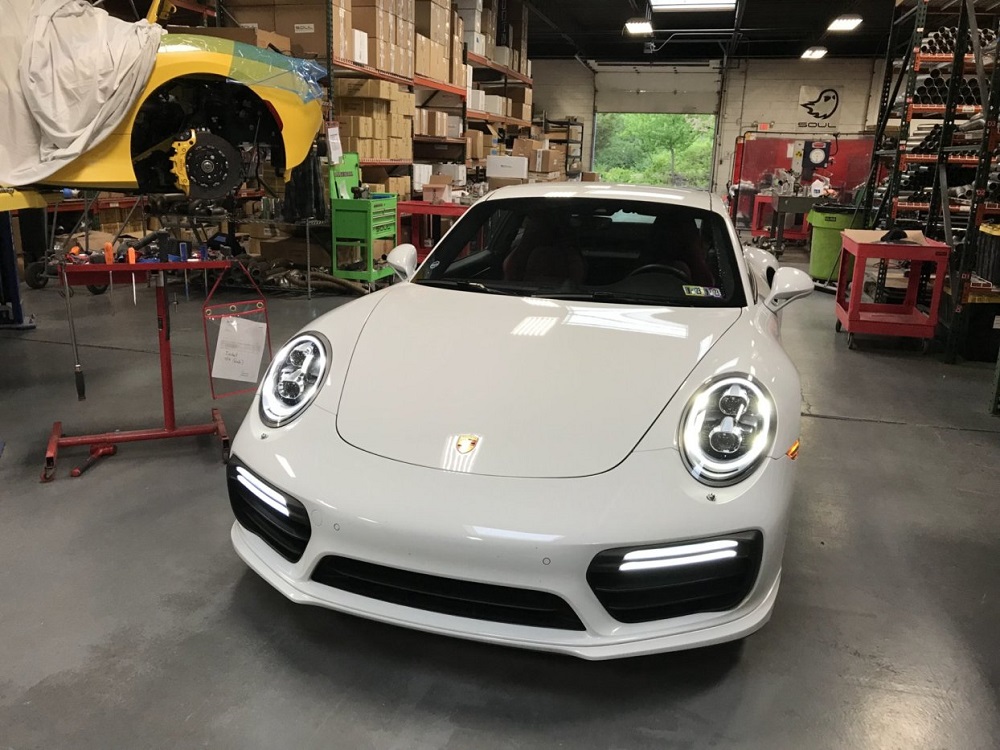 On my first shakedown drive Gaydos and I drove the roads around Soul Performance headquarters. I told him on that first drive that I felt with these modifications the car now moved a bit closer to a Porsche GT car in feel. Obviously, it is not a full fledged GT3 now, but it is closer to that experience and in some ways better than the GT3. It does not have the 9,000K redline screaming engine and the track focused suspension. But it is quicker in acceleration, more comfortable and I am willing to bet it would at least match the lap times a 991.2 GT3 could put down on any racetrack. If the track happens to be wet, it will destroy the GT3. My car is simply more engaging to drive now. It is more FUN. It has the sound to back up the performance. 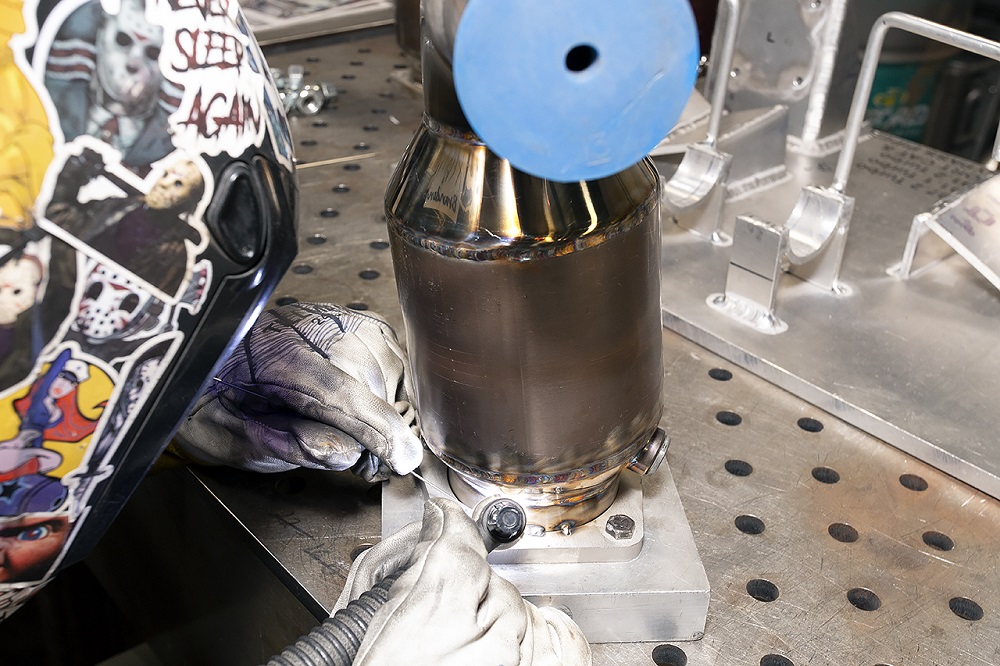 Because I am so close, I had the experts at Soul Performance install the exhaust and enter the tune for me. If you are in the area and looking for the same setup, you can figure on spending about $8,000 all in. To me, it was money well spent. It really is like buying a new car. And you can’t get much car nowadays for eight grand. In fact, I went to the Porsche configurator and configured a 992 Turbo S just like mine, and it came out to a little over $225,000. And that is before any Porsche dealer greed tax is applied. There is no questioning the brilliance of the 992 Turbo S or the GT3. But for the obscene money I would have to spend to get into either of those cars it makes no sense to trade my current car. Soul saved me money. 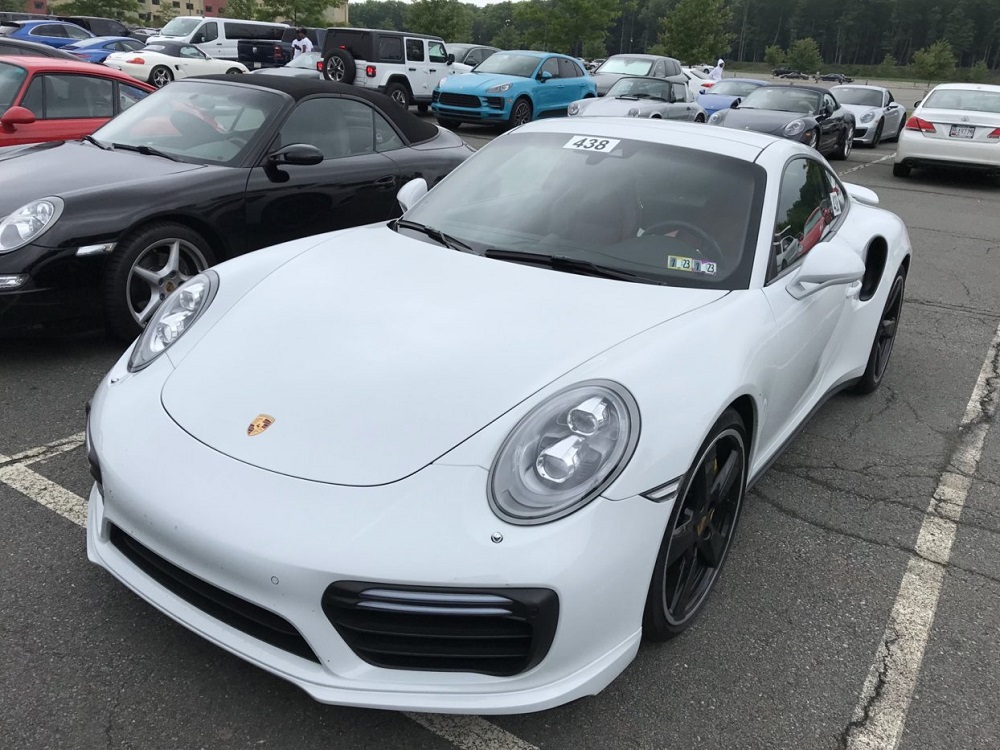 I plan to get this car on a road course and a drag strip so I can get some real numbers and have some real fun. On top of that I just want to drive it more. Since the upgrades I have found myself more eagerly looking forward every drive in my 911. If you are considering doing something like this yourself, I can tell you that your only regret will be that you didn’t do it sooner.